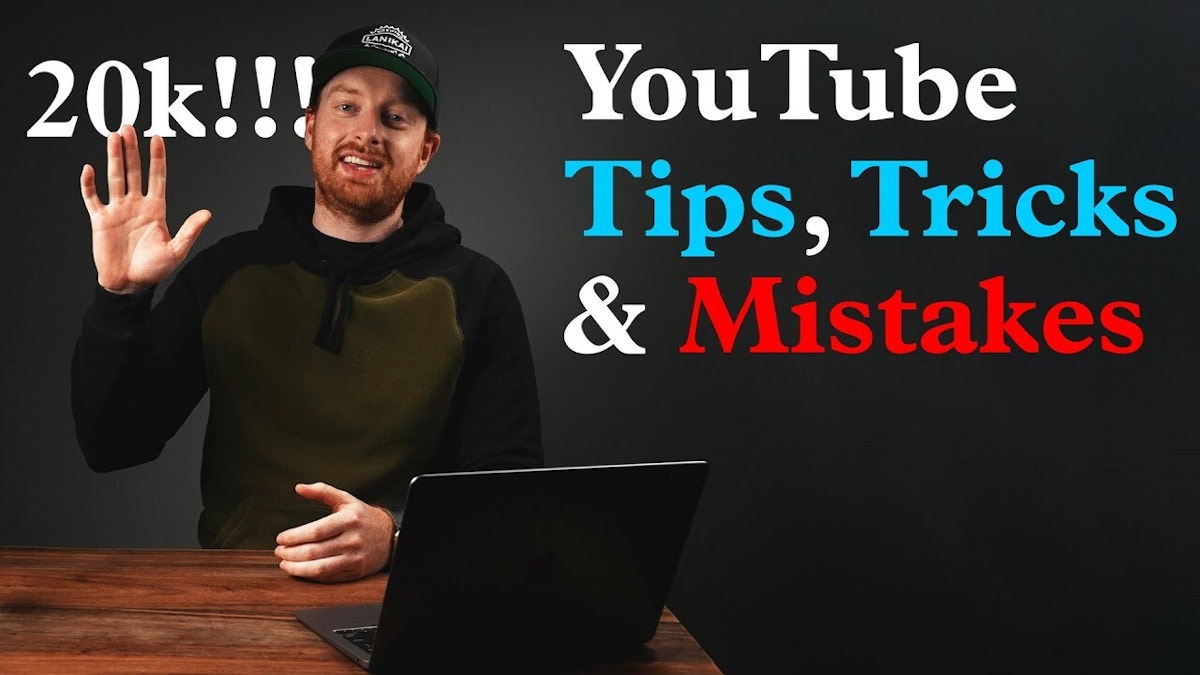 Thank You for 20,000 Subscribers! YouTube Tips, Tricks & Mistakes Made

After thinking about how crazy 20 thousand subscribers is I looked back at the 70 videos I've posted to this channel and dozens on other channels and I realized how many mistakes I've made and decided to share a few things I've learned from my mistakes over the years, and how you can avoid them.

1. Choose a Good Topic You're Passionate About

The first tip has to do with choosing what your channel will be about. Choosing a topic that you're passionate about is going to help propel your channel over the long run. Sometimes making videos can be a grind, and if you choose something you're really passionate about it can motivate you to make videos during the slower parts of the year, for this channel, it's the summertime. Seeing your views and engagement dip is tough to see sometimes, but loving the channel topic will definitely help you through these periods. If no one was watching these videos, I'd still be talking about this stuff with my friends. This channel gives me another outlet to talk about cameras and creating.

A mistake I made with other niche channels in the past was, I tried to make content that I thought would get tons of views, but it was a topic wasn't overly passionate about. I was really passionate about making videos, but the topics I was making videos about weren't that satisfying to me, but when I started making videos about cameras and creating, it really clicked for me. I'd be making these videos whether anyone watched them or not. But I'm glad you guys are finding them helpful.

This next tip goes off of finding the right topic or niche and coming up with the right topics that provide value. An example is, I found it tough to use a gimbal, so I wrote down all of the problems I had and made videos about those problems. It was really helpful to some people and while I didn't go viral, I was helping people with a specific problem they had, so when they found the answer to their problem, they were really happy. And I'm happy to help them out. I've learned that I'd rather have a few passionate viewers than go viral and have lot of views but never have anyone come back to the channel.

This was a tough lesson to learn on my other channel. I have a personal channel where I just upload more personal videos. One of the videos I uploaded about my German Shepherd was picked up by the algorithm and got millions of views in a few months, and while it was awesome to have a video get tons of views, it wasn't exactly great for my channel. My personal channel is more vlog content, so a random video blowing up that had nothing to do with my vlogs didn't really launch that channel. People checked out my other videos and saw they had nothing to do with my German Shepherd, so they left without commenting, subscribing, or returning to my channel ever again. Establishing a niche and providing value allows you to grow your channel over the long term for more sustainable growth.

3. Effort Does Not Equal Success

Another tough lesson I learned was that effort does not equal success. After that viral video, I decided to start a new channel and really go all-in on the production and editing. My first video was really in-depth and I thought it was going to do well. I wanted it to be perfect and I recorded it 3 or 4 times to get everything just right.

It took me weeks to script, shoot and edit. And I was ultimately discouraged when no one watched it. Looking back, the video is way too dense and it's tough to get through. It wasn't nearly as perfect as I thought it was either.

4. The Algorithm is Brutal

Another tip is that the YouTube algorithm is brutal. For a while, I tried to figure it out, but I don't think that is a great long term strategy, as it seems like the news is changing every day and I find when I make videos my audience asks about, or something I find interesting - the video tends to do better than when I try to come up with a video idea based on the algorithm. Also, some of my most popular videos in the long term are some of my worst performing videos the first week to a month after I post them.

An example of this happening is on this channel, is most of the videos that are suggested by viewers about specific topics will get some views right when I post them, but will often stay pretty stagnant until it ranks in the YouTube search algorithm weeks to months later.

5. Check out the Analytics, But Don't Stress Over Them

Speaking of ranking in the search algorithm, my next tip is that YouTube analytics are your friend - but it's important to not stress out about them too much. It's good to use them as a guide, but getting too wrapped up in them will make you lose your mind. Some topics just perform better than others.

An example of overanalyzing on this channel, is that I was wondering if having an intro and outro to my videos would make them perform better or worse. It seems like whenever you have an intro, people just skip right over it and I was trying to figure out the best way to have an intro to my videos while keeping people around. If I have an intro with my logo or some text, people are more likely to stick around if you keep it short, talk under it and just start the video straight away.

And I noticed this when I was watching youtube as well, some people have 30-second intros on their videos and I tend to skip over them after I've seen them a few times. So keeping it short and getting straight into the video is the style I'm going with if I decide to use an intro at all.

6. Slow and Steady Wins the Race

My next tip is to not stress out about making videos and focus on your videos and your channel. If you spend your time looking at analytics and what videos other people are making, and how many more subscribers and views they have than you, it will be really easy to burn out or get discouraged. YouTube is brutal. It takes tons of time and energy to make videos.

One mistake I make is going into my office in the morning, work my regular job, then after work go straight into working on YouTube videos, or my websites, writing scripts. It's easy to burn out doing that, and I was starting to burn out on working since that was all I was doing. It also doesn't help that my fiancé and I are getting married in a few months, so the added pressures that come along with that are pretty heavy as well. It's nice to realize that this isn't a sprint, it's a marathon - so taking your time and not going full steam ahead all the time is a good thing.