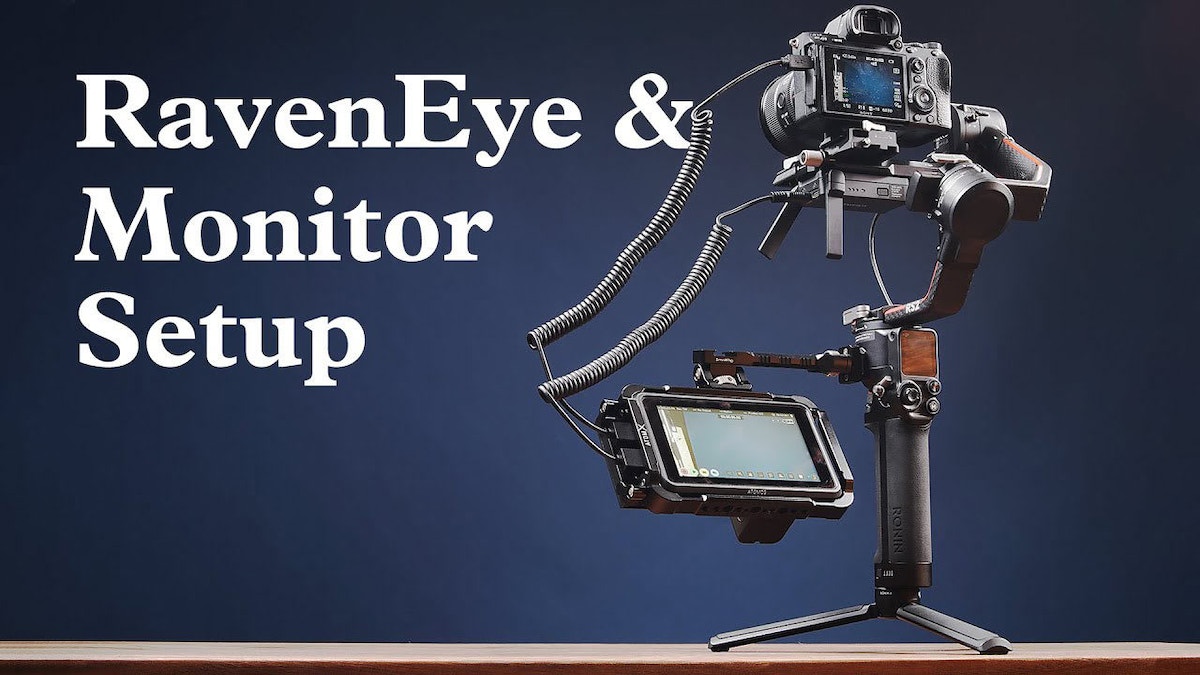 The RavenEye gives your RS2 loads of new features, but after taking it out of the box - you're pretty much on your own to figure out how to use it. The manual and documentation online is pretty limited and will leave many questions unanswered. Also, there are certain cables that have access to other features, for example, the A7III camera control cable can start and stop recording, but if you use the USB-C cable you can start, stop, and adjusts your ISO and aperture through the app. So be sure to check out the link in the description to DJI's camera compatibility list.

To start the process, lock off the arms of the RS2, and put your camera on the gimbal. Don't balance your camera yet, because adding the transmitter and cable will throw off the balance.

As far as antenna placement, I keep my antennas tucked in and haven't had any issues when I'm using the app within 20-30 feet of the gimbal. If you're farther than that away and are experiencing some dropouts, flip these antennas out. Now we'll attach the HDMI cable from the RavenEye to the camera, this is how our camera gets a feed from the RavenEye to the gimbal and Ronin App. Depending on what camera you have, you might use a different cable. DJI includes tons of different cables in the box - so be sure to grab the right one for your camera.

Then we'll attach our USB-C cable on the other side of the RavenEye to our gimbal. We're going to want to put the RavenEye cable into the bottom USB-C port on the gimbal.

In case you're wondering what the middle USB-C slot is for, it's for the 3D focus module. But we won’t be covering that in this video.

With everything set up, we can balance our gimbal and connect the Ronin App. If you haven’t downloaded the Ronin App yet, do that now and log into your account.

After balancing, we can turn our gimbal and RavenEye on. Wait for the RavenEye light to turn from red to blue - this means the wifi network is up and running. It will turn green once you’re connected.

Opening your device’s wifi, connect to the RavenEye wifi network, and if this is your first time doing this you'll be asked for a password. You can find the password on the side of the RavenEye. The app recommends turning off Bluetooth while connecting your RavenEye, on iOS I went to settings, Ronin, and turned off the Bluetooth for the entire app, so I wouldn't have to toggle Bluetooth on and off every time I wanted to connect.

Now onto some troubleshooting really quick, then well get into Q & A about the RS2 and RavenEye. I recently made a Tips & Tricks video for the RS2, and many of you guys had questions on that video, so well get to those after I go over a few weird issues I ran into.

The first one is the camera setup. For controlling our camera with the Ronin App, you'll have to use the appropriate camera control cable. Even then, you may run into some weird things still. These things had to do with my camera, I had to do two things to get this to work right, the first was turn off Control with smartphone. This is specific to sony cameras, but make sure to go to me MENU, Network, the globe, and on page 1, select Ctrl w/ Smartphone, Ctrl w/ Smartphone again, and turn this off.

The second mode I had to adjust was how my camera used the USB-C device that was plugged in. My camera immediately went into mass storage mode and you'll want to turn this off on Sony cameras by going to the menu, go to Setup, the toolbox, and on page 4 select the USB Connection. Set this to PC Remote. This will prevent the camera from entering Mass Storage mode when you plug the cable in and will allow it to be controlled with the gimbal and app.

Now onto the Q & A, Don writes I'm trying to set up my Ronin S2 with A7III but im stuck setting up Raveneye Works with a display at the same time the record in the App, I haven't seen in your video doing that or there something wrong with that feature?

There are potentially two different ways to go with this question, you want to use the app to trigger your camera recording, which in that case uses the correct camera control cable and the app's record button will trigger your camera record button. But if you don't want to record on your camera, but in the Ronin app, you can do this as well by not connecting a camera control cable and pressing select. This will save your video directly to your device. It will be much lower quality than your camera obviously, but if you want to quickly send a clip that is a great way to do it.

A person who wishes to stay anonymous asked my Raven Eye isn't allowing the active track to work. I can select a target, but my camera just doesn't follow. Is my RS2 broken?

The short answer is no. I think I know what’s wrong here because I did the same thing, multiple times and learned this lesson. You're probably using the wrong USB-C port on the front of your gimbal. I was using my RavenEye in the top USB-C slot and everything was working fine in the app - but it's like active track just doesn't work at all. So assuming you have everything else hooked up correctly and using the proper cable, that's probably your issue. Its frustrating because there is no error on the app, active track just doesn't work.

Don also asked, is it normal that I can't adjust ISO or Aperture in the app?

And one last question, Mo asked Cable management is very difficult, I have a field monitor, and using an HDMI cable to plug my sony into it causes the weight to disrupt the balance of the gimbal. It also is impossible to use the joystick to pan left/right because it will pull on the cable. How do you deal with that?

I already responded to him on YouTube, but using a longer cable works to take the tension off of your camera and monitor, but also Atomos sells a coiled HDMI cable. It's a little expensive, and I have no idea where mine is right now - but it works to keep the tension off of your camera by being long enough to reach your monitor but the coils in the cable allow for some give if you need more slack. If you want this with a straight cable, it's going to have to be pretty long, and then your managing even more cables. It's expensive at around $40, but it's a good solution to that problem.