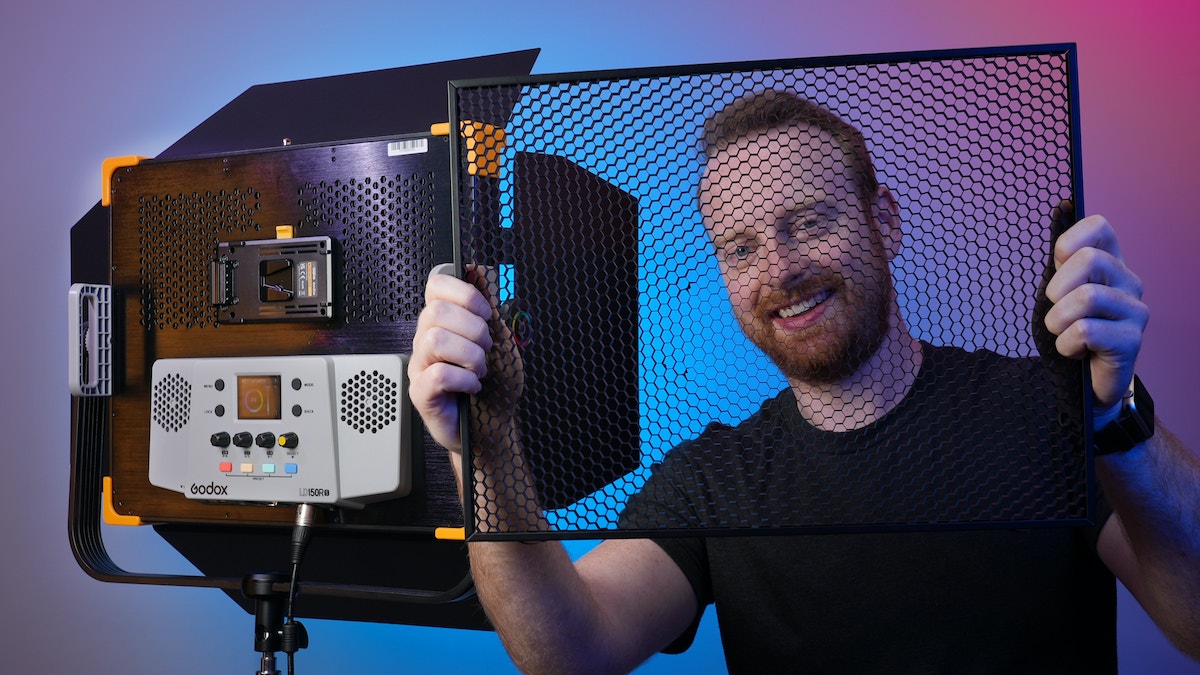 Godox LD150RS Review - Do You NEED A Light Panel?

The Godox LD150RS is a 20 point 9 by 20 point 2 inch RGB LED light panel that can change color temperatures from 2500 to 8500 kelvin, has a filter library and 16 million RGB values. Let's go over some comparisons, specs, how to use the different modifiers, and I'll give you my thoughts at the end.

Godox sent me this light to review, but this is an unpaid and all these words are my own.

Starting off with some comparisons to the 2 other Godox light panels. 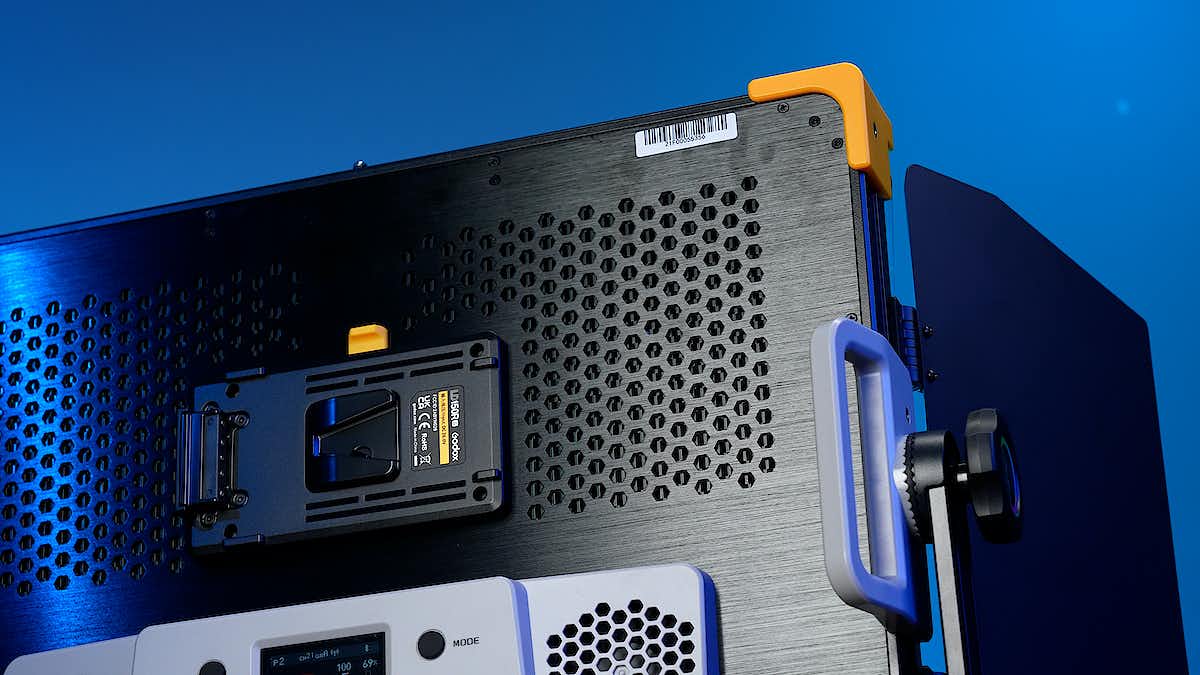 Digging into the LD150RS, in the box, you'll get the light itself, power adapter, barn doors, and a carrying case. The body of the light is made of hard plastic. The plastic feels durable, and I like that it keeps the weight of the light down. It would be nice to have an aluminum version of this light, but the cost would be significantly more and be much heavier. That being said, I'd still recommend using a heavy-duty light stand or C-Stand since this light still weighs over 11 pounds.

The handles on the back of the light make it easy to hold on to and move the panel. It's nice to hold onto one of the handles while you're adjusting the pitch of the light, especially if you have the barn doors or softbox on the light. I'm a fan of the black and gray housing, but the bright yellow edges around the light stand out a lot. I wish they made them the same color as the light gray control panel on the back - but I guess it fits with Godox's branding. For what it's worth, you can't see them if you're using the softbox. 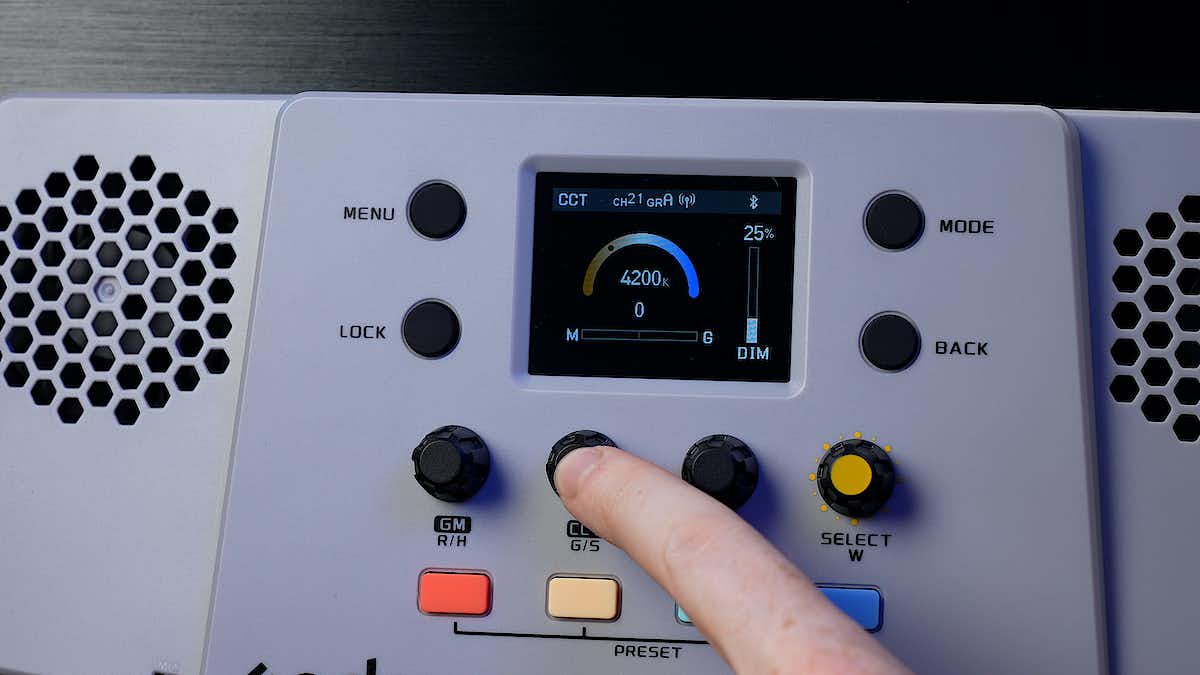 There is no shortage of dials and buttons on the back of this light. It's nice to be able to quickly control your settings, output, and color temperature adjustments with dedicated dials and buttons. You can also lock the screen if you're moving this light around a lot to avoid accidentally adjusting the light. Dedicated select and back buttons allow you to quickly navigate the menus quickly. You can save 4 presets on the back of the light that will remember the color and the dimmer settings as well. The presets quickly fade to black while switching between them, so presets are a great way to configure commonly used settings but not great for fading between scenes since the panel quickly turns off between each preset. I've been doing a little hack with the presets for commonly used color temperature, RGB, and filters, since pressing the preset buttons jumps directly to that mode on the light and you can quickly change the settings from there to cut out going to the mode menu each time you want to change color modes.

There is no lag between adjusting the inputs and the light responding, which makes it easier when selecting an RGB value with lots of possible combinations.

For connectivity, there are ethernet and 5 pin DMX ports, a USB port for firmware updates on the bottom of the light, the power input, and a power switch. 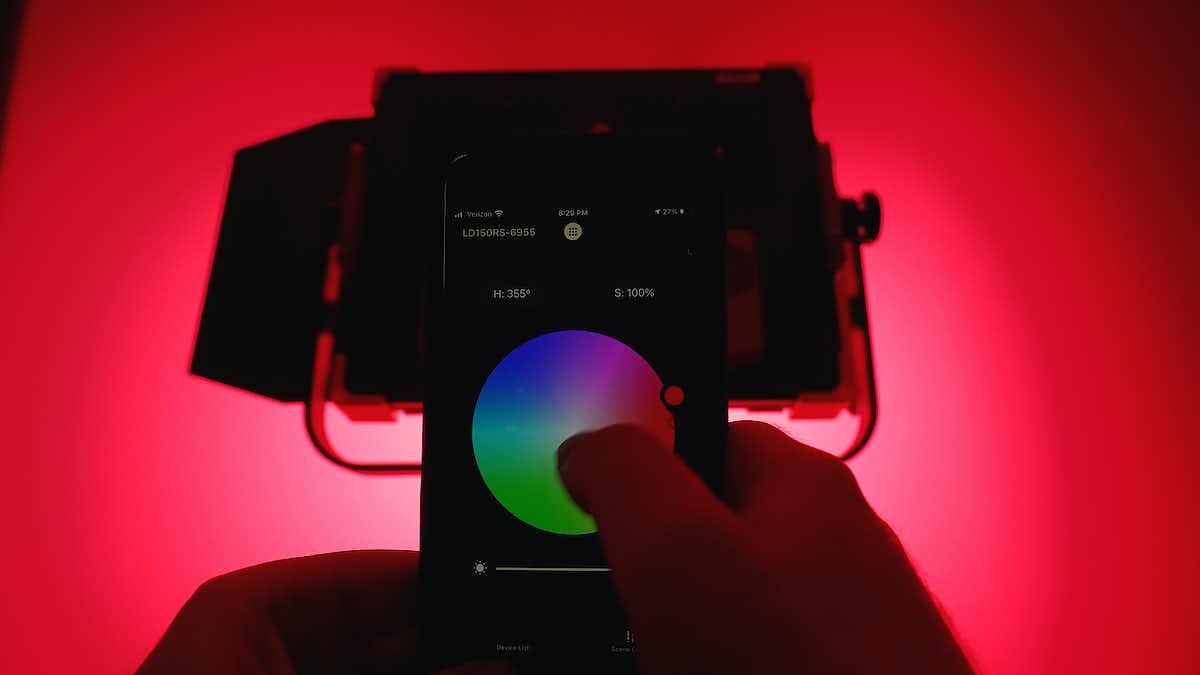 My favorite way to control the LD150RS, and all of my recent Godox lights, is with the Godox Light app. This light paired with my app and showed up in my group of lights and I was able to adjust all of the settings quickly. There is no remote included with the LD series of lights, but I find myself using the Godox light app to make adjustments rather than walking over to each light and manually adjusting it. Especially for these YouTube videos and small productions. 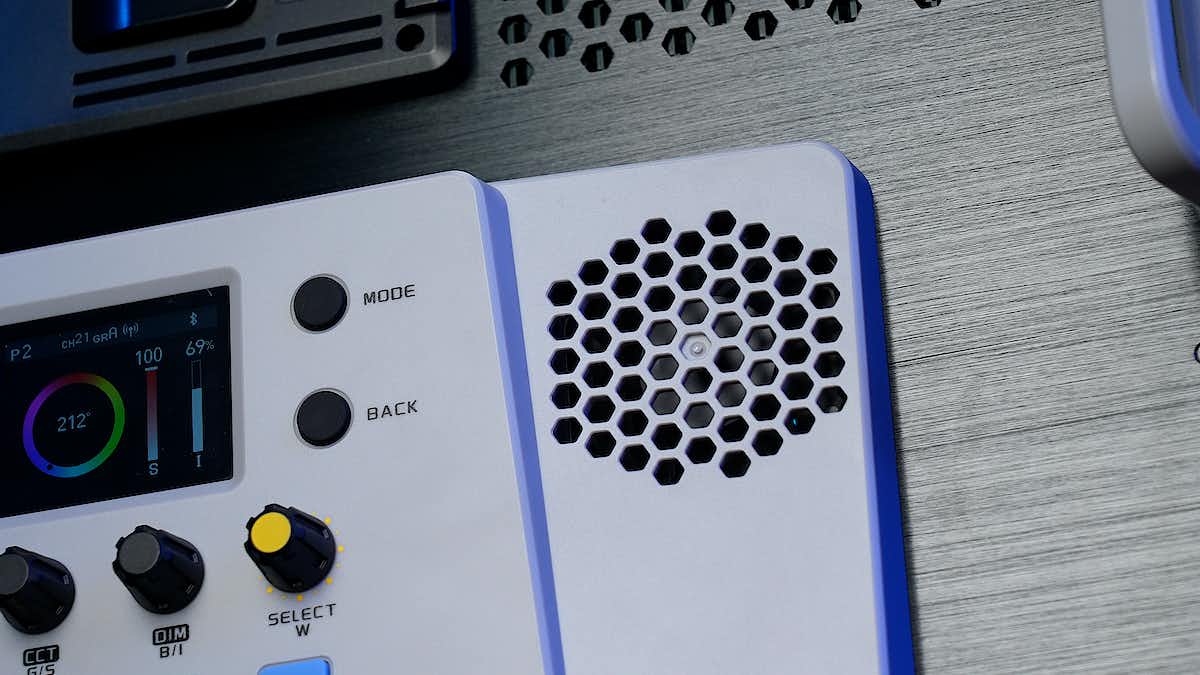 Onto the fans - the LD150RS has two fans in the back of the light that you can silence. While the fans are off, you can use the 150RS at 50% total output in any mode. The fan noises aren't overpowering, but they do make noise. I've been using the light under 50% most of the time, so keeping the fans off has been no issue for me so far.

An aside, I tried to hotkey the fan on/off to a preset button on the back of the light. I realize that this probably isn't the way Godox intended the presets to be used, but this currently isn't possible but it would be awesome to be able to toggle menu settings with the press of a preset button. The menus are fast and easy to use, but a single button press would make this even better. 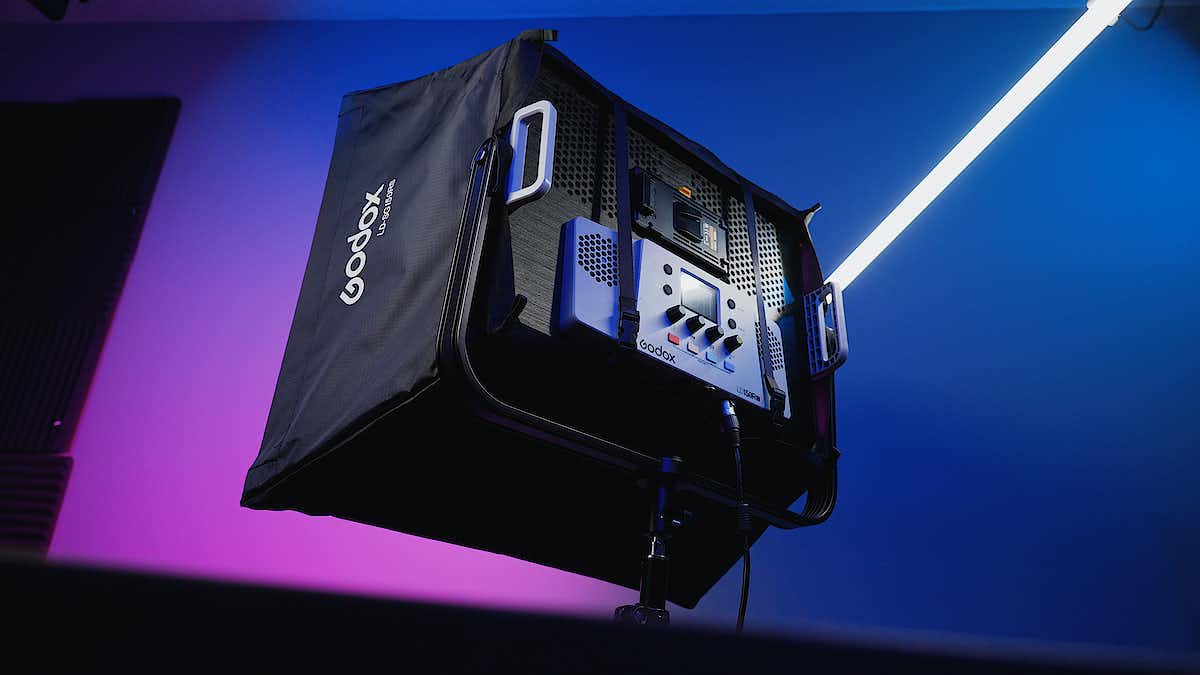 Due to the design of the LD150RS, there is no external control box. I wonder if the fans could be removed from the light if the controls were detached and a cable was run from the box to the light. The fans can be silenced and they aren't that loud while you're in front of the light. Since they are pointed at the back of the panel and the panel is so large, microphones shouldn't be able to pick the sound as easily. Let's take a listen with the fans on and my microphone in a few different positions in my normal studio for these videos.

The yoke and light stand mount are made of aluminum and the single knob on the side allows you to easily adjust the pitch of the light panel. There is a safety chain on the barn doors and on the top of the light if you're hanging this light up anywhere. The only mounting options are the yellow brackets on the front of the light. This is where you seat the barn doors into the light. The bottom brackets have springs you have to press to put in the barn doors. This sounds weird to mention, but my light came with the barn doors already attached and the manual doesn't tell you how to take them on or off. This required a little trial and error. 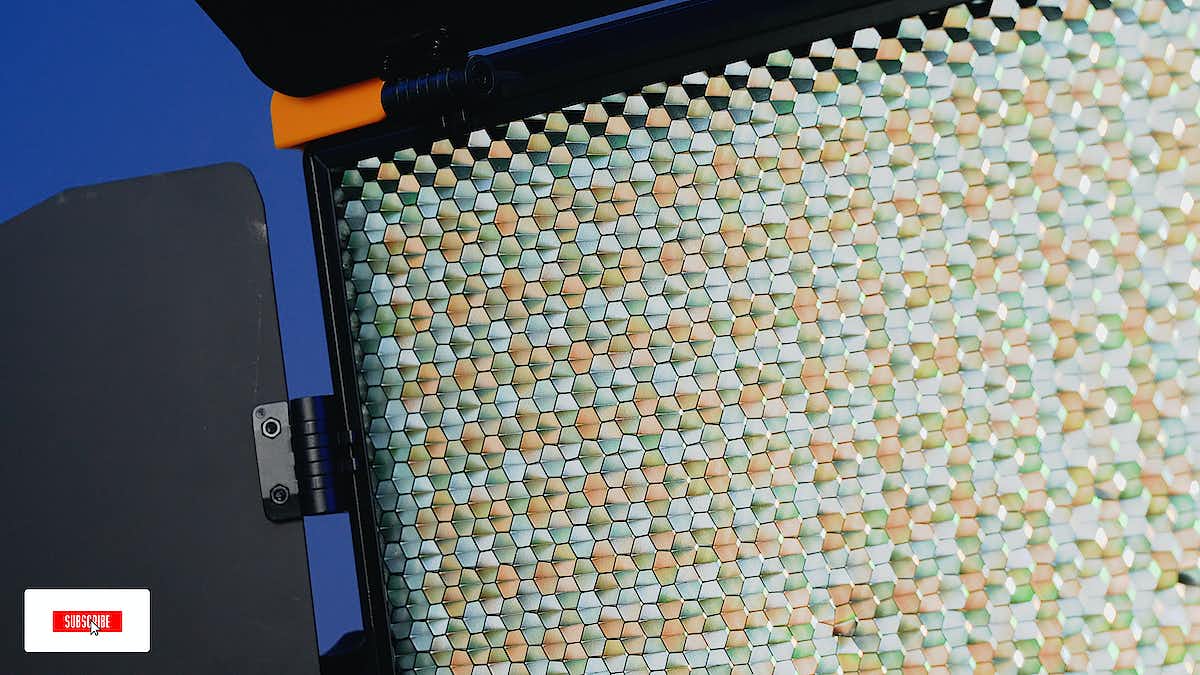 When it comes to shaping the LD150RS, since this light panel is made from lots of LEDs, there are many individual light sources with a thin layer of diffusion over them. The diffusion isn't enough to make all LEDs read as a single light source, so each LED is its own light source if you put something a few inches away from the light. This causes the barn doors to have multiple shadows when you're trying to shape the light. I thought that the honeycomb grid would help direct the light when using the barn doors, but the honeycomb grid does not help with the shadows of the barn doors. The honeycomb on its own does direct the light and avoids light spilling on the sides. The light is still hard, but the shadows aren't as distinct as a smaller light source like a cob light since it's a panel. This light is great at throwing lots of light around, but the light can be a little harsh for using with people. 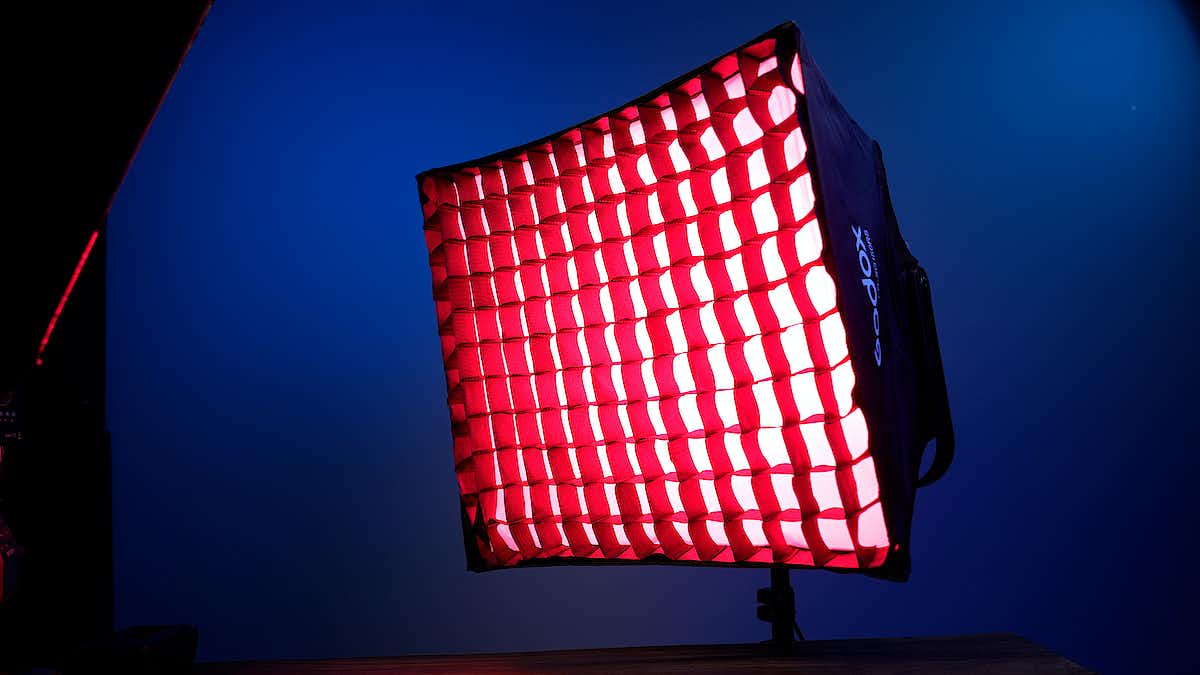 My favorite way to use this light is with the softbox to diffuse the light. The softbox is sold separately for $69 but the softbox comes with diffusion, grid, and a carrying case to keep everything in. This softbox is pretty specialized in that it can only be used with this particular light, but if you're going to be filming people, it's a necessity for this light. It really softens up the light and the grid allows you to direct the light as well. You kind of get two modifiers in one, since you get the grid and softbox with this light in one, I think it's a better buy over the honeycomb unless you need this light to be as slim as possible. That being said, the total width from the back of the light to the front of the softbox is 13 inches. You can use the softbox with or without the barn doors since there are wires in the softbox to keep it upright. If you're traveling with this light and want the lightest configuration possible, you can leave the barn doors at home and travel with only the light and the softbox. 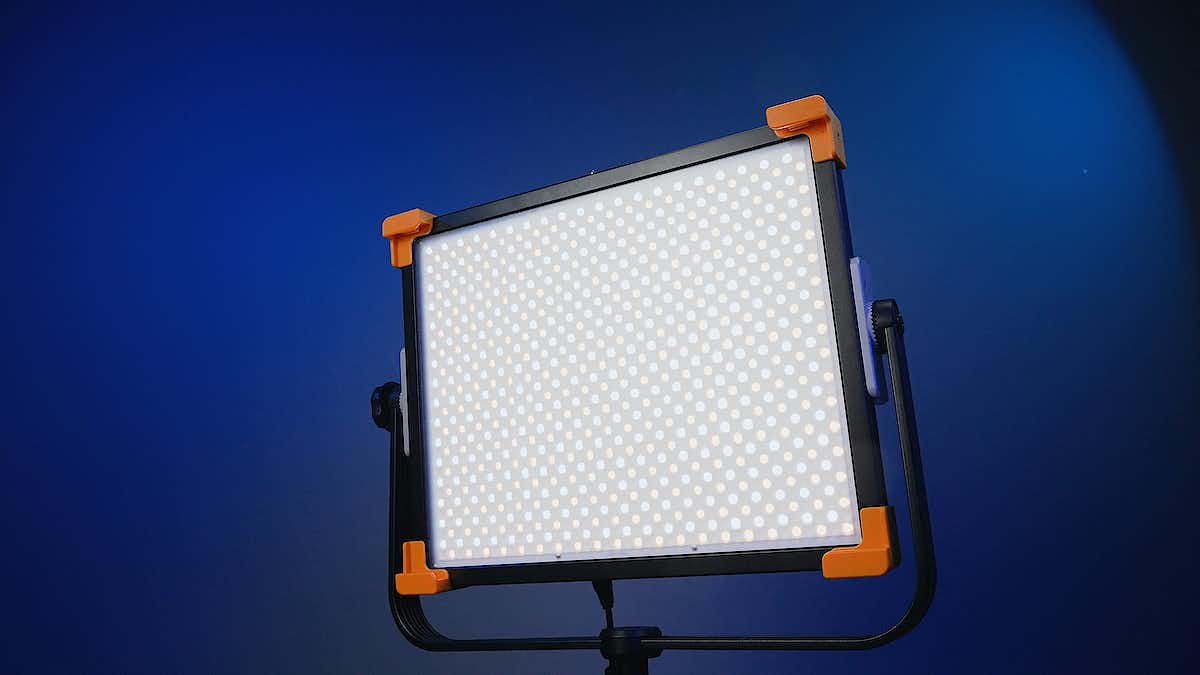 The light is flicker-free and can output in CCT mode from 2500 to 8500 kelvin. It also has RGB, HSI, Effects and can also use Rosco and lee filters. This is the first Godox light I've used with filters. This is handy if you're trying to match filters between lights. I don't tend to do this much since my other lights don't have this function, but this is a higher-end light with more specialized features so it's nice to know you can use these to match your other lights. 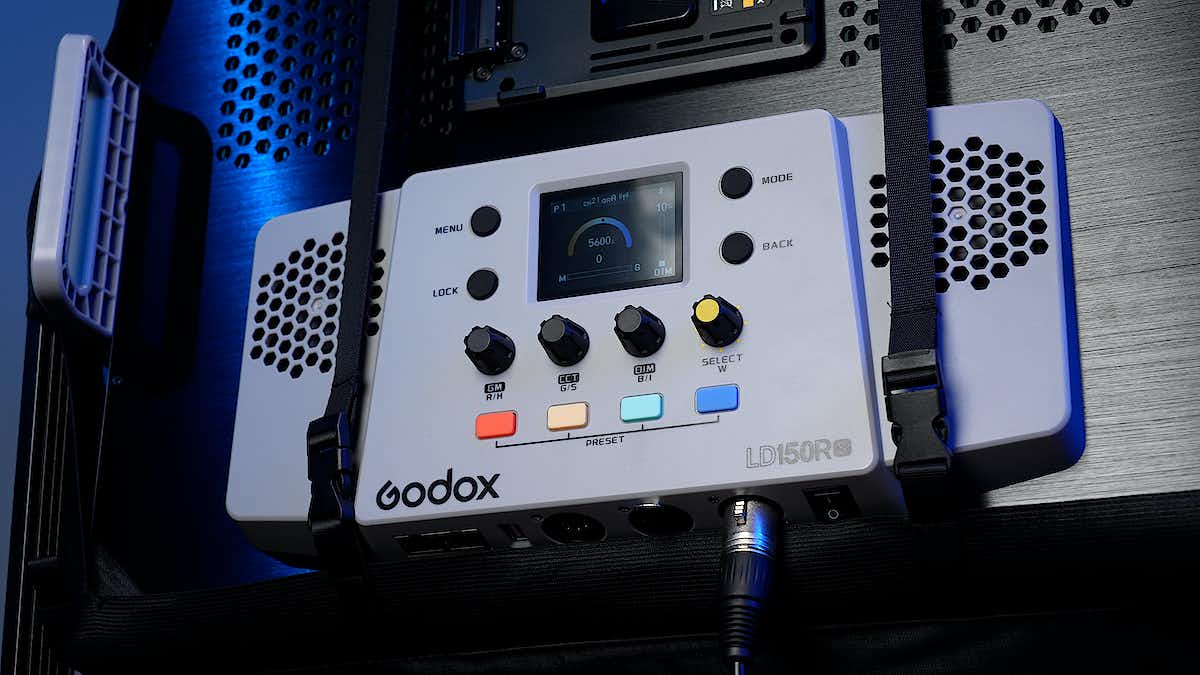 You can also adjust this light in increments of 1% from 0 to 100% which is good considering how bright this light is. I was using it under 10 percent for a few of my tests since it was so bright and such a large source. 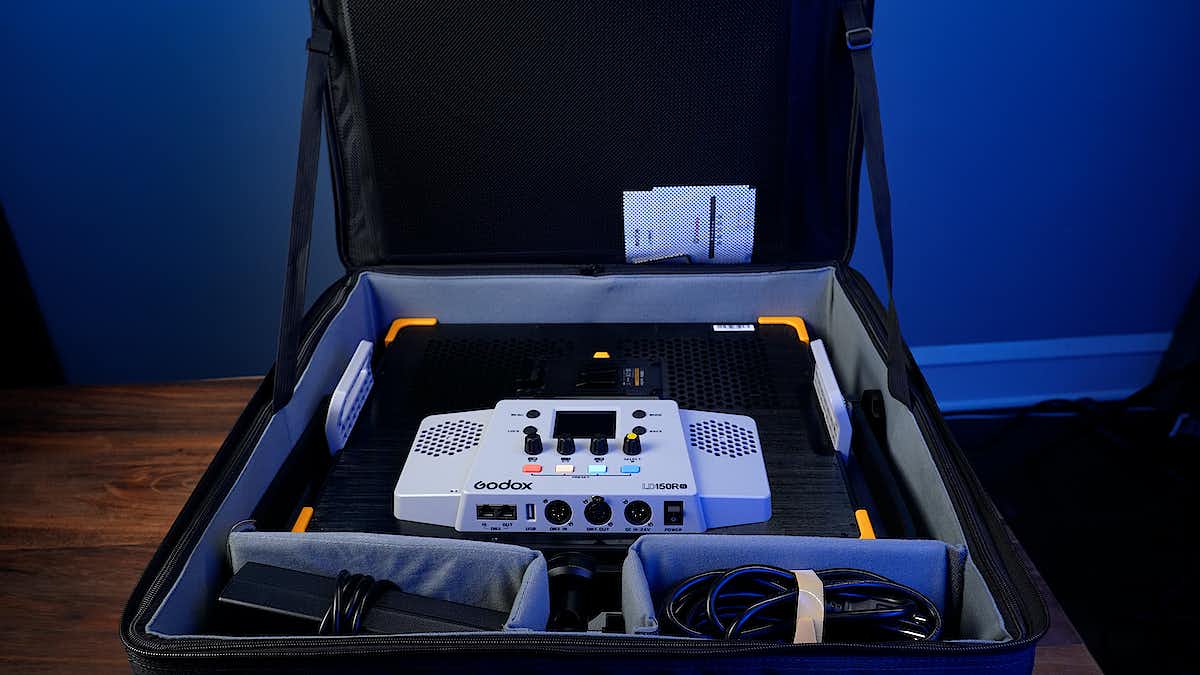 The soft-sided case that comes with the LD150RS is made of the same material that other Godox cases are made from and formed to fit the light and all of the accessories. The honeycomb grid and softbox fit into the zippered compartment in the lid. The power box and light sit in the main section. 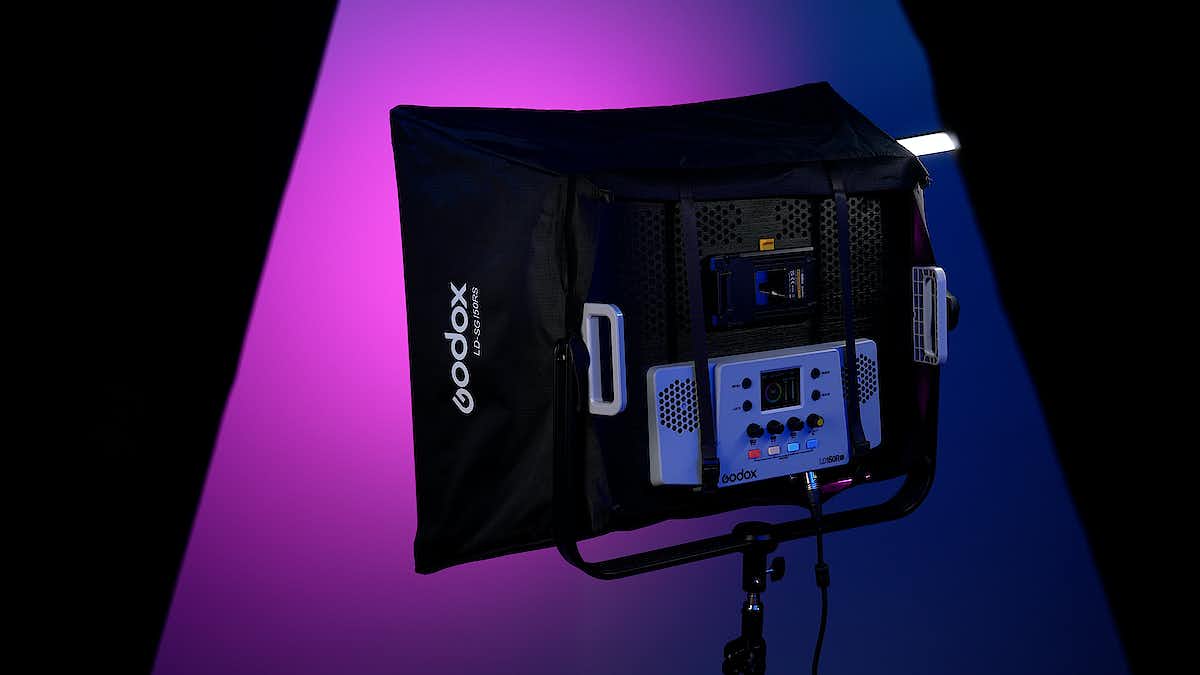 The LD series of lights are a welcome addition to Godox lights, especially since I can control all of my lights from my phone now. These lights are becoming bigger, brighter, quieter, and more connected, but they do come at a price. Light panels are more expensive than the chip onboard lights like the UL series but compared to other brands of light panels. The Godox LD line is bigger and more affordable but made out of hard plastic instead of aluminum that most other lights are made from.

These lights are great if you have existing Godox lights and need a really bright key light that can fit into a tight space or travel light. The light and softbox can fit into a single case and provide a ton of light, without taking up a lot of room. It has a ton of features, and my favorite part is that you can silence the fans if you're using it under 50% which is pretty bright. I personally wouldn't use this light over 50% with it being close enough to a microphone to pick up the fan noise.

If I'm lighting something for a client, it's nice to have a light source that is small enough to fit in a tight space but is bright enough to provide plenty of light. Sometimes, space is limited and I can't use giant softboxes, so having a light panel with a softbox and grid is a great tool to have. And I can also take off the softbox and put this light further away to flood an entire area with light.

I'd love to compare the longer LD150R, to this square panel to see how the light is distributed. Since the wider panel spreads the LEDs out over a wider area, I'm interested in how each of these 150-watt panels distributes the light with and without the softboxes.