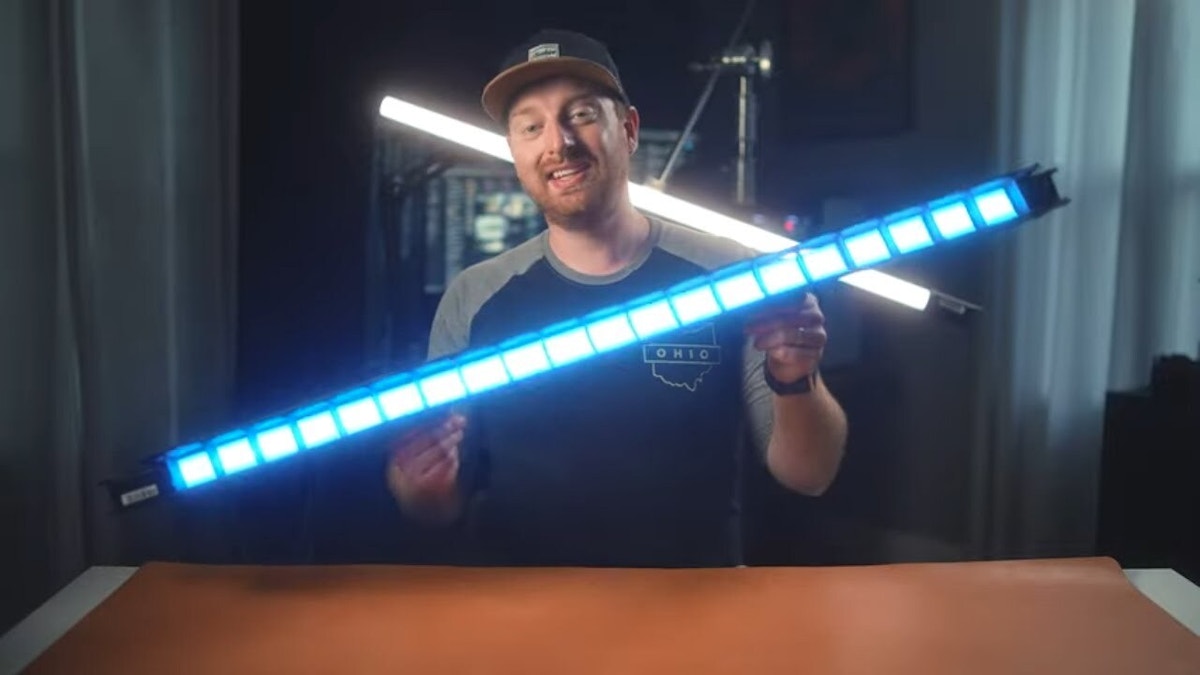 The Godox TL120’s are the longer versions of the TL30 and TL60. The TL120’s are longer, so have higher light output and better battery life, but are very similar in terms of design and functionality to the shorter lights.

Price and What’s In The Box

For comparison to other Godox tube lights, the TL30s are 11.8 inches and cost $89 dollars.

For comparison with other manufacturers, the 47.2 inch Amaran T4C costs $329 per light.

The PavoTube II 30X costs $579 per tube but are pixel tubes.

The light has a power switch and ac port on one side, and the DMX in / out, screen, and controls on the other. The light is made of hard plastic and has angled edges to put on a surface without the light rolling around. There is also a spot to hang the light with the safety chain or zip ties on either end.

The Godox TL120 has an integrated battery that can not be removed, on a full charge the battery will last for 2 and a half to 3 hours minutes at full power at 5600 kelvin. The battery life is much better if you don’t use this at 100%, in my testing I was able to use this light as a background light for 4 hours at 10% and still have 60% battery life left.

You can also leave these lights plugged in and have them run forever if you don't want to worry about battery life. I typically do this in studio settings.

The lights also has full RGB, HSI , Gels and effects as you’d expect with other tube lights.

The controls on the back of the light can adjust all settings on the light, or you can use the optional remote, DMX or Godox Light app from up to 164’ away within line of sight.

Worth noting, if you purchase the 4 light kit that comes with the case, the remote will be included in that package.

I’m a big fan of using the Godox Light app to control multiple lights at once since I have many lights that are compatible with the Godox Light app - while this isn’t a surprise that I’m able to control a modern light with an app, it’s worth mentioning since that's my preferred way of controlling lights. I have an old iPhone that I keep with me to control all of my lights and it’s worked out great.

You’re able to group lights with the Godox Light app and control the groups or lights individually.

I usually like to include fan noise comparisons in my light reviews, but since the Godox TL120 doesn't have any fans, like other tube lights - this isn't really necessary. But it’s another reason that I love tube lights, no fan noises to deal with and you can easily hide them almost anywhere.

When it comes to shaping the light, usually tube lights don’t have a way to direct the light anywhere. With the TL120 though, some packages come with a grid that you can attach to the light and direct it to avoid unwanted light spill onto other objects.

If you’re booming a tube light to use as a hair light, it will often spill onto your background. This is more apparent if you’re using an RGB color, so the grid is a really welcomed addition.

The case that is included with the TL 120’s is a soft-sided case.

There is also the hard shell carrying case available as well. It’s included in the 4 light kits, along with the soft-sided cases.

The TL120 is a giant light bar that is very similar to the smaller TL 60, but with more light. This light is still portable and can provide you with lots of light that can be put just about anywhere. Mounting these lights is more of a pain, but if you need more light, this comes with the territory

They are well built and come in a little cheaper than tube lights of similar size. If you have additional Godox lights that are compatible with the app, controlling everything with your smartphone as a one-man band or small studio can save a lot of time and energy.

Shaping light with the grid is one of my favorite ways to use this light when I’m not using it as both a prop in a scene and a light, and the grid can fold down flat to keep in the case alongside each light is a real win in my book.

What do you think of the Godox TL120? Let me know in the comments on YouTube!

The SZ150R is a Bi-Color and RGB light with 150 watts of power that you can control with the app, remote, dmx, or if you're old school, the controls on the back of the light. What…

The Godox UL60 is a daylight-balanced 60w LED light in their UL series. While it has shares the features of the UL150, it is in a similar class to the SL-60W and improves upon its…

Godox LD150RS Review - Do You NEED A Light Panel?

A short review of the Godox Cl-10 light. A great solution for live streaming and spicing up your background!