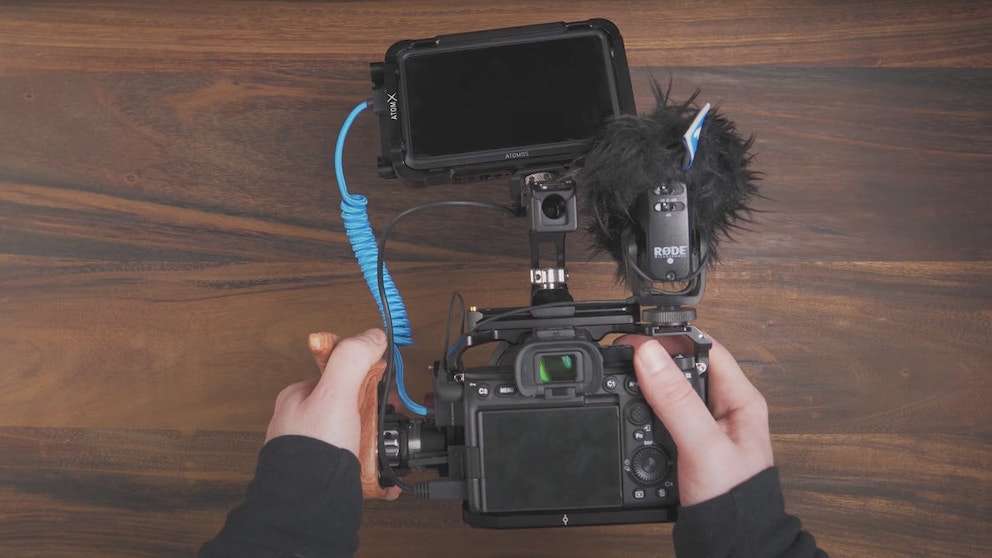 The A7S III is my favorite camera for video, I've been using it mostly for small to medium-sized client projects and these YouTube videos. When using this camera for clients, I'm mostly in a studio, and rigging this camera out depends on what the shoot calls for - But after using this in some run and gun situations, these are the accessories that I find myself adding to my camera to get the shots quickly and easily. And run and gun situations, for me at least, are all about reliably getting the shot quickly and easily.

An example of where ease of use comes into play is while you're out filming and need someone to film with your camera who may not be an experienced camera operator - you may not want them trying to operate the camera and pull focus at the same time. If this is a B cam and you're on the A camera, you can't peek over their shoulder to make sure they're racking focus properly or pull focus yourself, but with the A7SIII the eye autofocus or the focus tracking is good enough so I leave out follow focus when I'm run and gun filming.

So with that being said, let's jump into my base A7SIII run and gun setup - and at the end, I'll give you even more accessories I'll add if the shoot calls for it.

To start, I'm going to put my A7SIII in a cage. The cage and most of these parts are from SmallRig. Smallrig offers a great bang for your buck when it comes to camera rigging, there are more expensive and more budget options out there but for me, this is the sweet spot between value and durability. I like that this cage attaches at the bottom and the sides to make sure the camera is securely in the cage.

From there, the next accessory is the Nato rail and top handle. I'm a fan of having a big top handle on my cameras since it gives you another place to easily mount other things, as well as easily hold your camera. Once you start adding some weight to your camera, additional holding points make your life easier and if you have to get a low angle for something - top handles are the best tool for that job. This SmallRig handle has a recording button on top as well. Once you put your A7SIII in a cage, the cage may block your recording button since it's on the top by the shutter. Having an additional record button makes your life just a little easier, but you will have to plug the multi-cable into your camera.

Wooden Side Handle with Record Button

Another handle I love adding to my rigs is a side handle. This wooden SmallRig handle is an absolute beast when it comes to holding your camera steady. It's the most comfortable side handle I've ever used for a camera. I particularly like using the handle on the left, since I'll be plugging a lot of cables into the left-hand side of my camera. Also, and this is an opinionated reason to use the left handle, is that I like using the grip of the camera for the right-hand grip. I remap most of my cameras to easily access camera settings and the menu options mostly with just my right hand, so if I'm filming, I don't have to take my left hand off of the wooden grip. This isn't 100% always the case, but I'd say a solid 75% of the time I'm able to keep my grip on my camera and adjust the settings I need with only my right hand. If you guys are interested in how I set up my A7S III, leave a comment below and let me know if you'd like me to make a video about it. I think it would be an interesting video.

On to monitoring, I use an Atomos Nina V to monitor my video and I always use it in a cage. This one is again from SmallRig and I've been using it since I first bought my Ninja V. It adds more mounting points but also supports the secure connection of an SSD into the recorder. Not sure why atoms didn't lock the SSD's in place, but at any time you can just rip these hard drives out of your recorder and ruin a shot. This cage helps keep the hard drives properly seated and secured. For batteries, it depends on how long the shoot is and how handheld it is. Big NPF batteries are heavy and add tons more weight to the setup, but run forever. Battery size just depends on the shoot.

As for HDMI Cables to the recorder, I'm using the Kondor blue coiled HDMI cable. It's able to shoot the prores raw reliably and the coiled cable makes cable management much easier. It doesn't snag on things or hang slack around the camera while still being able to move. I've gone through multiple HDMI cables for the A7S III and ninja v, this one is the cheapest and best while looking the coolest. Win-win-win.

As for audio, I typically shoot off-camera audio - but for backup or scratch audio I use my trusty Rode Videomic Pro. This is the original version, it's been lots of places with me and still is going strong. There are probably better and cheaper options available right now, but this mic has been great for me over the years. I attach it to the camera through the cold shoe mount on the camera, but if I need to get the mic away from the camera more you can use it with a cheap friction arm. I have the arm but have honestly never used it with the mic.

As far as filters go, I've used a few variable ND filters and standard ND filters and have landed on the Peter McKinnon VND. It's expensive, but it's the best filter I've ever used. The lack of cross-polarization and hard stops alone was enough for me to pick on up. The hard stops are great for running and gunning.

For diffusion, I've gone with a 1/4 strength black pro mist. I bought my black pro mist years ago and have had it in my bag ever since. It's a great filter but would love to check out the new polar pro VND with diffusion. That looks interesting, but I haven’t had a chance to pick on up to try it out yet.

As far as media is concerned, I've been using a mix of cards and hard drives depending on my shoots. I've mostly been using prograde v60 cards for general shooting, and v90 cards if I need to shoot a higher codec or frame rate. I've never used a CFExpress card and don't think I ever will, but I've also been using either a 500GB or a 1TB SanDisk SSD in my ninja v. I have some opinions about storage for the A7S III, so if you'd like me to talk about which storage makes the most sense - let me know in the comments below and I'll gladly make that video.

Moving on before I make a rant video about storage, well get into my bonus accessories for my A7S III rig. The accessories mention before this are my go-to run and gun tools, but these below really depend on the shoot or what the client is looking for.

My first bonus to the rig is wireless video transmission. Clients love this as well as camera operators because the client can have a screen of their own to check the shot, as well as getting the client away from the camera operator so they aren’t peeking over their shoulder the entire shoot. This is a pretty common one while in a studio, but sometimes it can make it's way to a run and gun shoot as well.

Wireless audio is another common addition to this rig. If you're filming an interview with someone sitting down, I like using a mic boomed overhead. But if they’re walking around, wireless lav mics are the best option and this cage offers many options for mounting a wireless receiver so you can monitor the audio.

Additional powering options are another great addition. I'm not a fan of using v-mount batteries on run and gun shoots because of the addition of tons of cables that are easy to snag and are a mess to cable manage, but sometimes you need to add additional powering options to your rig. Sometimes it makes your life easier though to have a few more cables and to not worry about battery levels of lots of different parts while using a big v-mount battery.

Lighting is another addition that just depends on the shoot. On camera, lighting is something I try to avoid at all costs, but back to the moving subject audio example, sometimes adding an on-camera fill light is something you need to do. I've been using these LED panels, and for these, I'll use a friction arm to rig these to the camera cage.

This next addition is something where we’re venturing into the huge rig world and that is a matte box. I typically never use a matte box for the filming I'm doing and for run and gun filming it's a little overkill in my eyes. Adding rails and huge heavy filters make your camera much heavier and bulkier but that being said, sometimes the shoot calls for that and you need to use it. I don't have any matte boxes to show you, but this is something I see people use with their cameras often. You look official, but I feel like most of the time if you're running and gunning with an A7SIII you don't need a matte box and giant filters, but that's my opinion.

There are so many other options out there for camera rigging, but these are the ones I keep coming back to. This rig allows me to use the camera easily and quickly get the shots that I need and move on to the next shots - as well as being easy enough to hand to someone who isn't familiar with the camera and let them use it as well. Telling someone to tap the subject to let the A7SIII keep focus while they hold the camera with one of the handles and can look at the nice big bright screen of the ninja v makes life easier. And the addition of the recording button on the top handle is pretty hard to miss.