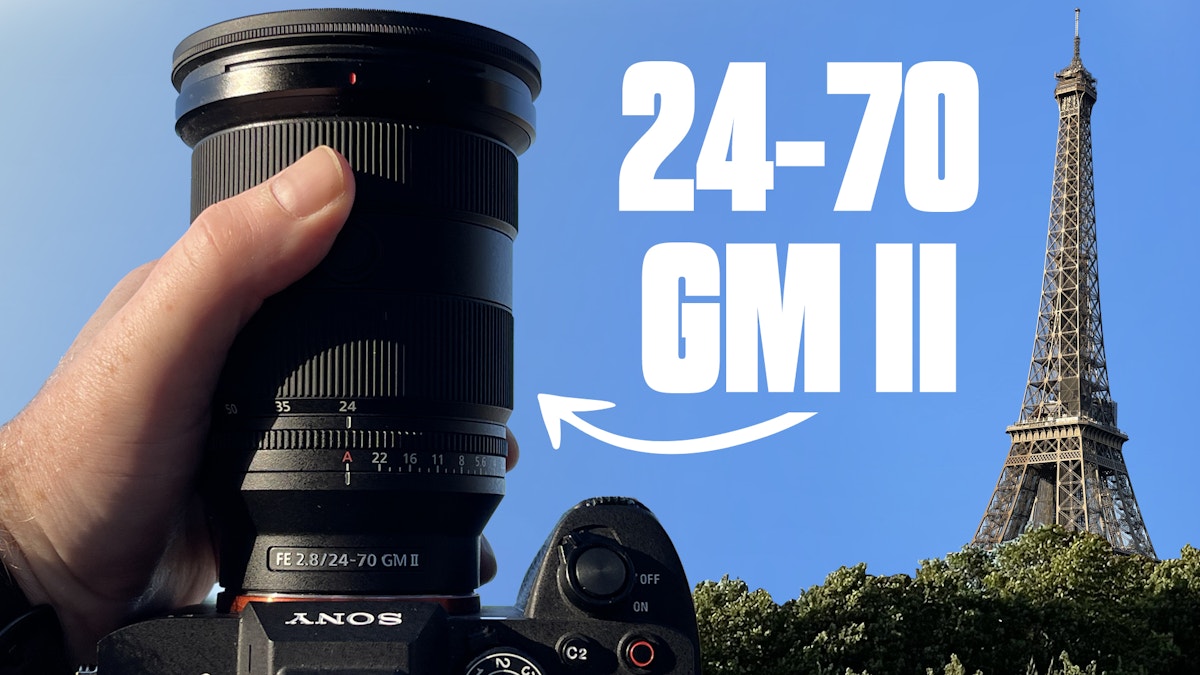 Both Sony and Tamron have come out with new versions of their Mid-range zoom lenses. The Sony 24-70 G Master II is lighter, smaller, and better than the first version. The Tamron features a new focusing motor system, closer focusing distance, and better image quality.

But how do these lenses compare to each other? Let's go over some specs and tests and I’ll tell you what I think at the end.

Starting out with the most glaring difference between these two lenses is the price. The Tamron costs $900 brand new, while the Sony costs $2300. You could buy 2 and a half Tamron lenses for the cost of the Sony lens.

Both lenses are pretty much the same size though, the Sony is 4.7inches or 120mm, while the Tamron is 4.6 or 118mm. The Sony is a half-inch wider in diameter, and the front filter thread is a huge 82mm. The Tamron’s filter is a much more common 67mm.

When it comes to build quality, this is a place where the Sony 24-70 G Master II wins over the Tamron, as it should given the price difference.

The Sony has a zoom ring, focus ring, Aperture ring, Iris lock, two dedicated function buttons, AF/MF switch, and a smooth and tight switch to adjust the tension through the zoom range. The build quality feels much more stable than the Tamron, but it also weighs more as well.

The Tamron has one customizable button, a zoom ring, and a focus ring. The build feels more plasticky, but also weighs almost half a pound lighter than the Sony. The lack of an AF/MF switch can be frustrating, but you can program the MF toggle to one of the customizable buttons on your camera.

When it comes to autofocus, the Tamron 28-75 has very good autofocus in ideal conditions, but in low light, it struggles to nail focus quickly without hunting. The Sony 24-70 has great autofocus, even in low-light situations.

In this test, each lens is focusing to its minimum focusing distance to about 8 to 10 feet away. I set the A7IV’s focus shift sensitivity on 5, where I normally keep it, and then the highest possible at 7.

The Sony was able to nail focus quickly, without hunting at 5 and 7.

The way the XD Linear motors work on the sony almost looks like it’s quickly racking focus the easing into nail focus, while the Tamron’s VXD linear motor tended to hunt for focus and take significantly longer. These are both played back in real time between the 5 and 7 focus sensitivity, this is an extreme test but it best illustrates the differences between the focusing motors.

When it comes to the difference in focal length, 4mm might not sound like much of a difference, but once you layer in lens breathing compensation and active stabilization that both have slight crops, the wide-end of the focal lengths begin to suffer. To be fair, the Tamron is incompatible with lens compensation, but even after turning all the features off that crop into the image, 24 vs 28 on the wide end can be difficult to work with in situations where you can't swap lenses in the middle of the shoot, like weddings for example.

In my opinion, the extra 5mm on the end of the focal length isn’t as important as extra 4 at the wider end. For general photo and video it’s not a huge difference, but it’s something to keep in mind if you need the widest range available.

When it comes to flaring on the Sony 24-70 G Master II, if were pixel peeping the Sony does a better job, but I would be hard pressed to find a difference outside of these tests unless you’re pointing this lens directly at the sun for extended periods of time. The flare control is more controlled on the Sony so if you enjoy filming with your subject peeking out from the sun, the Sony will have a more pleasing effect but if you don’t do this, or use diffusion filters the difference won't be as pronounced. 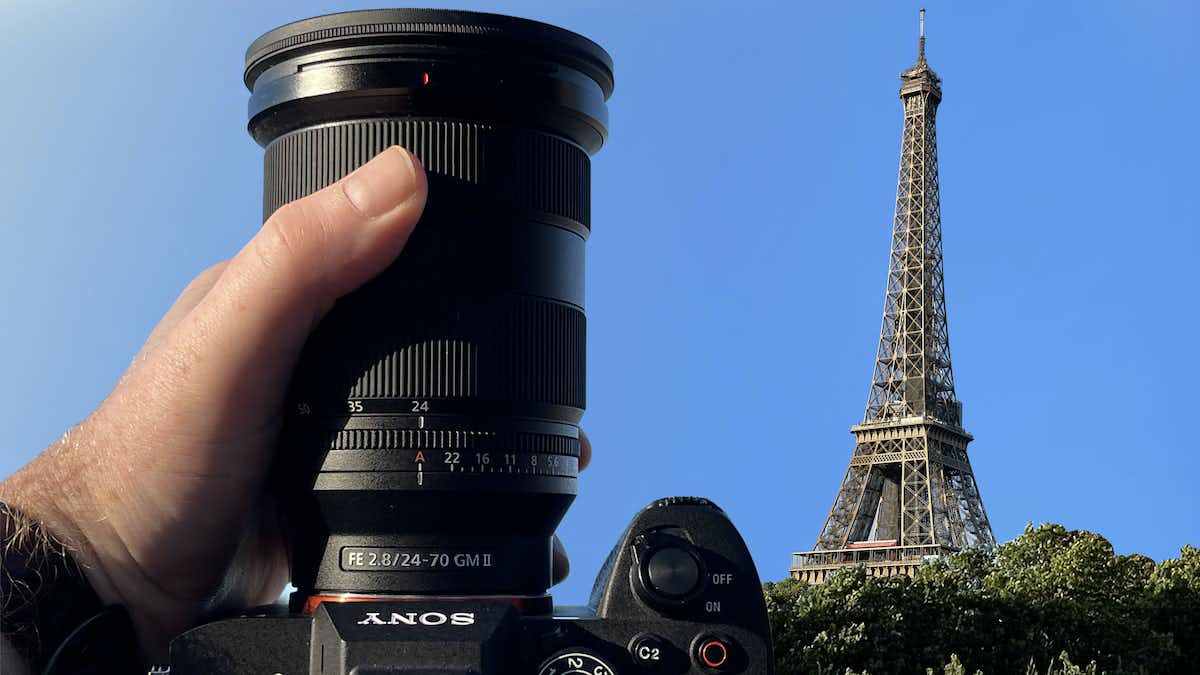 For sharpness and image quality, the Sony 24-70 G Master II has the advantage over the Tamron slightly in the center, but this gets more apparent towards the edges when were at 2.8. Things get less noticeable when we're at f4, where I think these lenses are pretty close throughout the frame. The Sony looks sharper and retains great contrast, but it’s 2 and a half times the price of the Tamron, so the Tamron is actually holding up very well when we zoom in on the image. Both lenses are very usable and you may not notice the difference if these lenses weren't side by side and zoomed in over 200%. The win goes to Sony, but the Tamron deserves some recognition for being that close, given it’s price.

Both lenses don't have many distracting focus breathing problems, the Sony 24-70 G Master II has access to the lens breathing compensation to completely eliminate any focus breathing at all on new Sony bodies while the Tamron does not. Unless you’re doing a lot of rack focuses, you may not even notice the focus breathing though.

On a gimbal, both of these lenses were able to be used on my RS3 Pro, both lenses were balanced around the middle of the focal range and were able to work well. Worth noting though is around 70mm on the Sony if I flipped the screen out while balancing the camera with the screen in, I would get a poor balance notification. Flipping the screen in fixed this, but the Tamron was able to handle this better since it was lighter. I was able to have the screen of my A7SIII flipped out throughout the focal range and I didn’t get any out-of-balance notifications on my RS3 Pro.

I have to note that the 24-70 II has a switch that I’ve grown to enjoy with gimbal work though, and that was the zoom tension selector. I’m not sure if that's the technical term, but I used this lens for a wedding and loved flipping between the two tensions. Smooth allowed me to zoom the lens more freely, while tight kept the current zoom in place. I go more into detail about this in my 24-70 video I’ll link at the end of this video.

When it came to choosing between these two lenses, I found myself choosing the Sony 24-70 G Master II over the Tamron. But this isn’t necessarily the best choice for everyone.

If you’re a beginner, if you're not using this lens to make money, or if you mostly use primes, and are looking for a low-cost mid-range zoom, the Tamron 28-75 is an absolute no-brainer. It's the best bang for the buck lens as long as you understand the limitations. If you’re using a gimbal, the Tamron is also going to be easier to balance and use for longer periods of time.

If you’re looking for the best autofocus performance, especially in low light or for client work where using autofocus and nailing it without any hunting is necessary, then the Sony 24-70 GM II is the lens for you. The slightly wider focal length does come in handy when you're running and gunning. Do keep in mind that the filter size is much larger on the Sony than the Tamron, so be sure to price in any filters you'll need if you don’t already have them. The addition of the aperture ring, zoom tension, and af/mf switch makes it very easy to use on the fly.